MCD Curator Walk-Through: The Object in Its Place with Carol Covington

The Museum of Craft and Design presents a Curator Walk-Through celebrating the extraordinary career of Exhibition Designer Theodore (“Ted”) Cohen. The Object In Its Place: As Designed by Ted Cohen brings art to life, celebrating the “fabulous” career of Ted Cohen’s extensive years as an exhibition designer, featuring art objects he has designed in many museums and residences throughout his illustrious career.

Because Ted has brought his design eye to so many artworks in so many spaces throughout so many years, it is understandably hard to choose which objects to feature in a single place. Join guest curator Carol Covington, in conversation with MCD Curator Ariel Zaccheo, as viewers are led through the process of curating this special retrospective of works from some of his favorite places, artists, and collectors– granting an inspiring glimpse into the aesthetic “worlds” he created.

The exhibition, also designed by Ted Cohen, features works in wood, glass, fiber, and ceramics by celebrated artists, such as Mildred Howard, Peter Voulkos, Robert Brady, Marilyn Levine, Mary White, Clifford Rainey, and Therman Statom. When Theodore Cohen puts The Object in Its Place, it is an exceptional and extraordinary result. He brings the object to life and makes each piece glow in its place!

Not a member? Join today!

After graduating from CCA in 1952 on the GI bill, Ted designed hundreds of exhibitions for institutions across the country, including the Oakland Museum, the American Craft Museum (now Museum of Arts and Design) in New York, Stanford Children’s Hospital and, of course, the Museum of Craft and Design. He re-imagined the in-home collections of many and was continually being called back to tweak this or that as collections expand, tastes change, or collectors (who become dear friends). Ted was a recipient of the Fulbright Scholarship for travel to New Zealand, and in 2000, the American Craft Council named him an Honorary Fellow, a distinction awarded to those who have made an outstanding contribution to the crafts in America.

Curator,  Carol Covington, decided to pursue a career in fine art and graphic design while attending college in Florence, Italy, and London, England through Florida State University where she received her degree in Art History & Visual Communications Design. Carol began her career as an Art Director, then Art Gallery Director, and later became an Independent Curator; during which time her company, Exhibits, produced over 100 exhibitions in public spaces and museums from 1990 to 2010. In addition, she has also been Curator and Producer of permanent, historical exhibitions for many corporations and institutions. Ted Cohen designed many exhibitions for which Carol was Curator and Carol collaborated with Ted to assist in the production of many design elements in his exhibitions over the past 26 years. 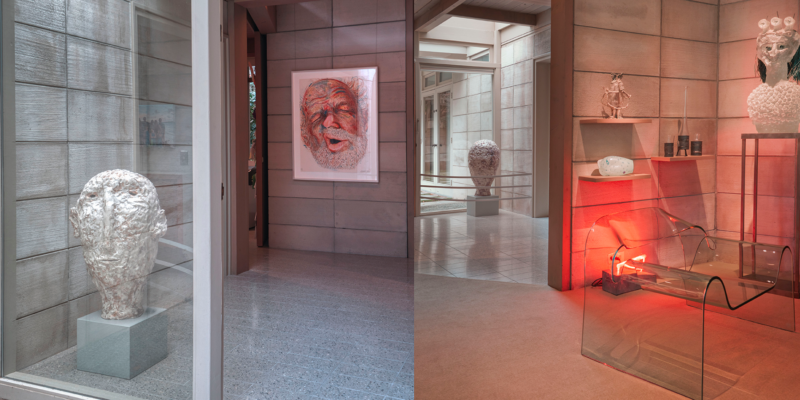 THE OBJECT IN ITS PLACE: AS DESIGNED BY TED COHEN

When Theodore Cohen puts The Object in Its Place, it is an exceptional and extraordinary result. He brings the object to life and makes each piece glow in its place.