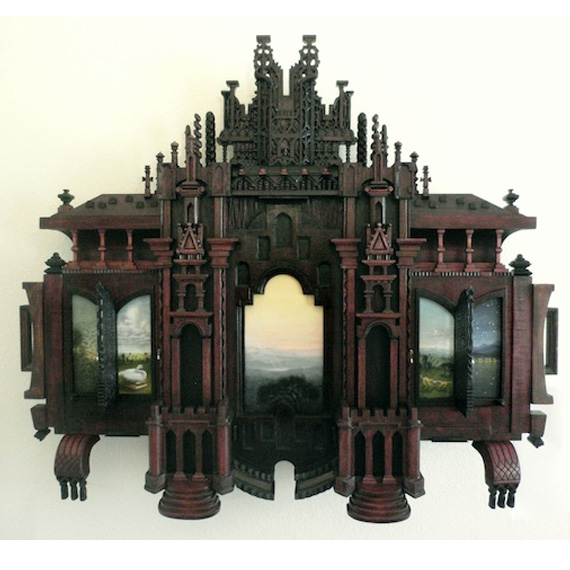 Evoking an alternate universe based on surrealist, gothic and renaissance vocabularies, while tapping into mythological references, the exhibition features 12 elaborately carved and deftly painted works of art that are best described as carved frame-painting hybrids, as well as sculptural works of gilded carved wood.

Investigating how shape, form and mass can articulate iconography and embody a ritualistic altar-like presence, Holly Lane: Carving Allegories highlights Lane’s skills in painting and woodwork, through her meticulously realized works of art. Marc D’Estout, Curator, Museum of Craft and Design comments,  “Weighted with infinite stories, Lane’s artwork employs a shadowy humor with a visual vocabulary that is unmistakably idiosyncratic. With her amalgamated constructed-paintings, she invites viewers to not only step through the looking glass but to acknowledge and examine each elaborate portal before escaping into her surrealist universe.”

Lane was still a student when she began thinking about the notion of framing her paintings. Most “serious” painting at the time rejected frames as trivial, decorative, or simply pointless.  While researching illuminated manuscripts in a university library, she saw how some borders visually commented on the text. From this observation she realized that a frame could be many things, and soon began to create pieces that shifted frame and painting, reassigning the frame as a dominant, contributive element.

Armed with one small bench-top scroll saw and an arsenal of “old world” hand carving tools, Lane’s meticulously designed and carved frames are equal in merit to her skillfully crafted paintings. Prefaced by working drawings, she carefully cuts, sands and fabricates the gothic inspired structures that cradle her allegorical visions.

Holly Lane: Carving Allegories was organized by the Museum of Craft and Design, with the support of loans from Forum Gallery, New York, NY. The exhibition, Holly Lane: Carving Allegories, is curated by Marc D’Estout, curator of the Museum of Craft and Design. Exhibition design: Ted Cohen. The exhibition is generously supported by the Windgate Charitable Foundation and Grants for the Arts / San Francisco Hotel Tax Fund.