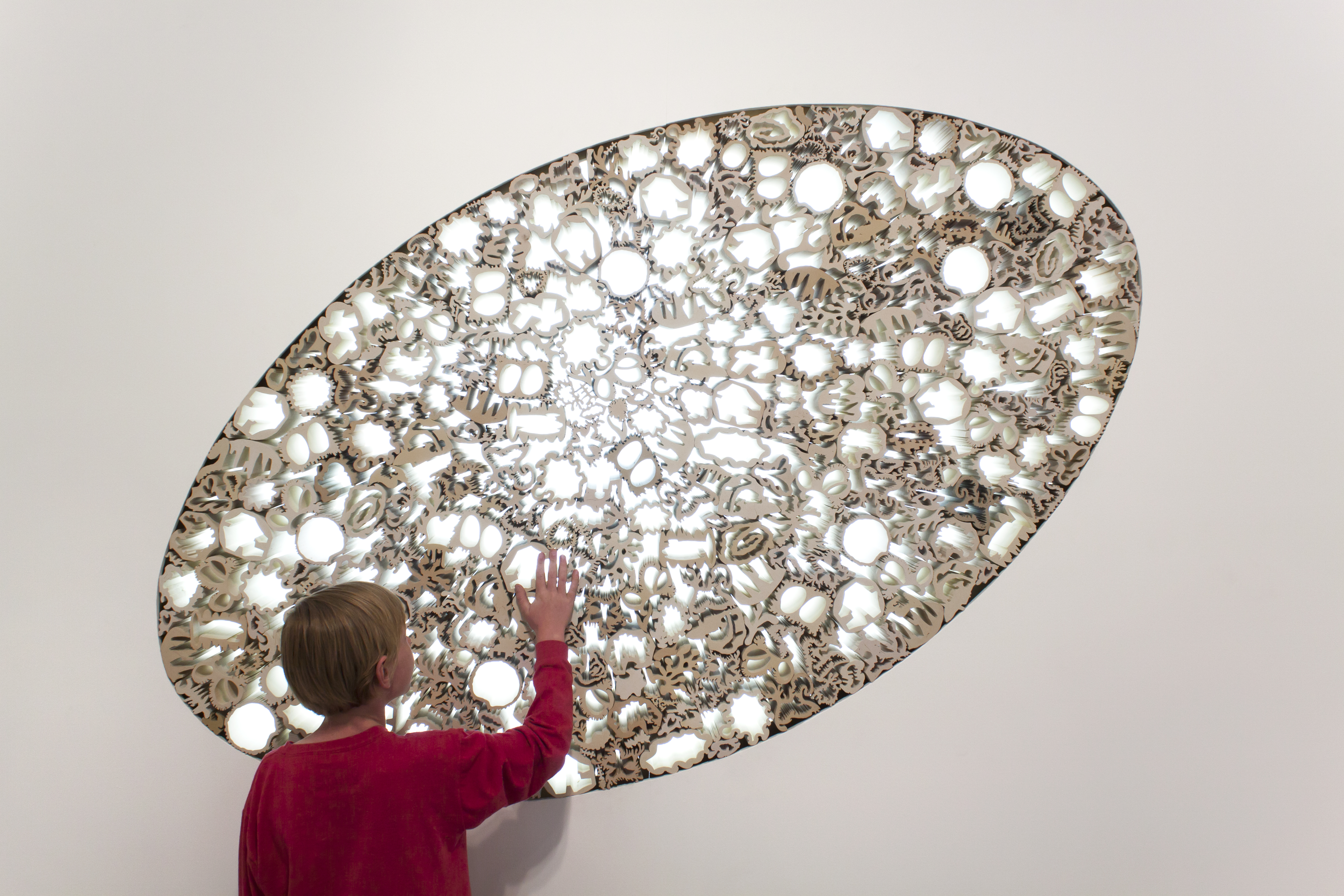 San Francisco, February 2019 – The Museum of Craft and Design is pleased to announce Material Domestication on view March 16–July 14, 2019. The exhibition highlights six contemporary artists working in a variety of mediums and chosen specifically as a means of expanding the conversation pertaining to the relevance of, or perhaps insignificance of, gender in contemporary craft. Once viewed as leisure activities for the wealthy, the notion of craft as “women’s work” was developed during the Renaissance, as divisions were formed between gender and class in European society.

Guest curator, Elizabeth Kozlowski states, “The purpose of Material Domestication is to be inclusive rather than exclusive. It is an attempt to dismantle historical markers of gender related to process and material. The intimacy of handwork is stretched beyond its traditional limits. Each artist achieves enormous scale through the use of physical repetition and, in turn, dispels historical notions of craft and gender.” Kozlowski further notes the overarching artistic processes highlighted in Material Domestication as that of bodily knowledge, in which meditative physical muscle memory is activated through modular components that are stacked, folded, felted or woven.

The creative processes of the artists, which include Jamie Bardsley, Nathan Craven, Christine Lee, Mi-Kyoung Lee, Rowland Ricketts, and Adam Shiverdecker, take on an almost obsessive quality, focusing on slow production and repetitive making as an investigation of materiality and technique. Interdisciplinary artist Christine Lee notes that her “predisposition to work in a rhythmic fashion, reflective of my internal cadence,” deepens her “understanding, sensitivity and appreciation of the inherent characteristics and nuances” of the salvaged architectural materials she works with to create her large-scale installations. Whereas, Rowland Ricketts uses his training in traditional Japanese indigo farming and dyeing to create his contemporary textile installations. His devotion to slow production methods are intentional, what he refers to as “a conscious act of recognition that all the energy extended in the farming and processing of the indigo plants is just as much a part of the final dyestuff as the indigo molecules themselves.”

Similarly, Colorado-based artist Jamie Bardsley, who transforms exhibition spaces with her site-specific large scale ephemeral porcelain installations, is interested in the “memory of the manifestations.” Bardsley notes that the thousands of pieces of folded clay that comprise her ephemeral sculptures can be reconfigured endlessly, which enables the artist to physically transform space with the intent of capturing a moment in time.

From ceramic casting, dyeing, weaving, and hand-manipulation, the works featured in Material Domestication, through the act of physical repetition and without gender bias, transform the museum gallery space from the floor to the ceiling and further dispels historical notions of craft and gender.

Behind-the-Scenes Open to the Public
In advance of the exhibition opening visitors are invited to witness the behind-the-scenes installation of Adam Shiverdecker’s suspended ceiling sculpture, Jamie Bardsley’s individual handcrafted porcelain works being transformed into an expansive floor sculpture, and the onsite construction of Christine Lee’s giant cane wall panel.

The installations will take place during the museum’s normal visitor hours March 4-14, 2019 and is part of the museum’s Visible Transparency Project.

About the Artists
Jamie Bardsley is a ceramic installation artist currently living in Grand Junction, Colorado. Thousands of pieces of folded porcelain capture Bardsley’s palm print and poetically document the passage of time. Her ephemeral installations have been shown at various galleries across the United States as well museums such as the American Museum of Ceramic Art in Pomona, California and the Florida Museum for Women Artist in Deland, Florida. She received her Bachelor of Arts from Arcadia University in Philadelphia, Pennsylvania and her MFA from Bowling Green State University in Bowling Green, Ohio.

Nathan Craven’s work examines ceramics as a building material, specifically the brick, which has a long history of use as a unit of construction. Constructing porous walls and floors with his own versions of “bricks” he aims to define and clarify space in ways that draw attention to these otherwise unnoticed elements. Craven holds a BFA in ceramics from Weber State University and an MFA in ceramics from the Rhode Island School of Design, as well as completion of a two-year residency at the Archie Bray Foundation in Helena, Montana and one year at the Roswell Artist in Residence program in New Mexico.

Mi-Kyoung Lee’s repetitive process of mark making has been the strength of her work. She allows her intellect and body to follow the rhythmic processes of repetition, understanding the relationships between tool and material, material and process, and image and content. Lee earned her BFA in Fibers from Dong-A University in Busan, Korea, and her MFA in Book Arts/Printmaking from the University of the Arts as well as an MFA in Fibers from Cranbrook Academy of Art. Lee has had a number of national and international shows, including the Cranbrook Museum of Art, Chicago SOFA and Busan Metropolitan Museum in Korea. Her work has been represented by Snyderman-Works Gallery since 2004.

Christine Lee, an interdisciplinary artist, designer and educator, works at these intersections with a creative practice intent on revealing the latent potential of disregarded material. She experiments with multiple configurations and patterns to transform these overlooked materials. Lee has exhibited in group exhibitions at various venues such as the NYC Museum of Arts and Design, the Aspen Art Museum, and the ASU Art Museum. She has been a resident artist at the University of Wisconsin-Madison’s Wood Program, Purchase College, Recology (SF Recycling & Disposal, Inc.), the Anderson Ranch Arts Center and the ASU Art Museum.

Rowland Ricketts utilizes natural dyes and historical processes to create contemporary textiles that span art and design. Trained in indigo farming and dyeing in Japan, Rowland received his MFA from Cranbrook Academy of Art and is currently an Associate Professor of Studio Art at Indiana University. His work has been exhibited at the Textile Museum, Cavin-Morris Gallery and Douglas Dawson Gallery and has been published in Textiles Now, FiberArts, Selvedge, Surface Design Journal, and Hand/Eye Magazine. Rowland is a recipient of a 2012 United States Artists Fellowship.

Adam Shiverdecker creates forms from wire and then coats those forms with clay, allowing the clay to fracture over the wire forms. Eluding to forces of decay, this process speaks to a culture’s disintegration. Shiverdecker has held multiple artist residencies, including Tyler School of Art, The Archie Bray Foundation and Greenwich House Pottery. Adam was awarded an Emerging Artist Award by the National Council on Education for the Ceramic Arts in 2014 and Ceramics Monthly in 2010. While in graduate school at The University of South Carolina, he worked as an artists’ assistant at FuLe International Ceramic Art Museum in Fuping, China.

About the Curator
Elizabeth Kozlowski
Combining her passion for textiles and contemporary scholarship, independent curator Elizabeth Kozlowski is editor for the quarterly journal Surface Design, part of the Surface Design Association. Kozlowski has been awarded numerous curatorial residencies and travel grants including the 2018 Creative New Zealand Cultural Exchange Grant; the 2017 Windgate ITE Scholar-in-Residence at the Center for Art and Wood, Philadelphia; and the Danish Arts Foundation International Research Grant in 2015 and 2017 respectively. Kozlowski has an M.A. with Honors in Museum Studies from Arizona State University and a B.F.A. in studio art awarded by Florida Atlantic University, Boca Raton. She is currently a doctoral candidate in Cultural Anthropology at Tulane University, New Orleans.

Museum of Craft and Design
The Museum of Craft and Design (MCD) is the only museum in San Francisco devoted to craft and design. Founded in 2004, the MCD showcases designers, makers and artists through an exciting and distinctive series of craft and design-focused exhibitions and public programs. As a non-collecting institution, the museum actively collaborates with artists, designers, museums and universities, as well as design venues and practitioners to create inspirational experiences in the world of craft and design for visitors of all ages.