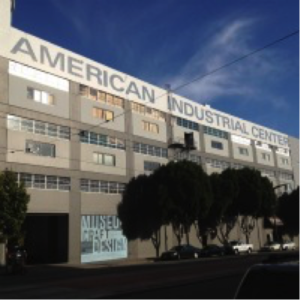 With storefront access, the 8,500 square foot space, designed by Gary Hutton Design and McCall Design Group, features 4,000 square feet of exhibition space and the museum’s first dedicated public workshop and programming space, in addition to a 600 square foot flexible museum store and administrative offices.  As the first major cultural institution in this burgeoning San Francisco district, the Museum of Craft and Design’s Executive Director JoAnn Edwards notes, “Dogpatch is teeming with creativity and camaraderie and we’re thrilled to be part of the continued transformation of the district into a thriving enclave for arts, culture, dining and entertainment.”

A non-collecting institution, the Museum of Craft and Design was established in 2004 as the San Francisco Museum of Craft +Design. Originally located near San Francisco’s Union Square District, the museum temporarily closed in the summer of 2010 after losing its downtown location and re-launched in the autumn of 2010 with a series of pop-up museums in locations throughout the city.  In the beginning of 2012, the Museum announced their move to a new permanent home in San Francisco’s burgeoning Dogpatch neighborhood. One year following the announcement of their new facility the Museum will open to the public.

Integral to the institution’s reopening and renewed vibrancy is the flexibility the Museum incorporated with their transient pop-up museums, which sustained the Museum, its staff and its public relevancy during the search for a new permanent home. Bringing pop-up exhibitions featuring the works of exemplary artists from local, national and international craft and design scenes into the city’s many vibrant neighborhoods, dramatically increased community outreach and accessibility to the Museum.  Continuing to engage in a nimble manner and to cultivate a greater understanding of the dynamic needs and experiences that San Francisco’s differing communities seek, has enabled the Museum to add greater dimension and scope to the expanded programming at the new facility.

Building Design
LOBBY + MUSEUM STORE – The Museum’s lobby and museum store act as the Museum’s entry point and encourage visitor curiosity through expansive visual vantage points and glimpses of exhibitions.  The 600 square foot museum store will act as a flexible space, expanding or decreasing its footprint as needed.  In support of the Museum’s mission, the Museum store will provide visitors with additional resources to enhance their museum experience, through a unique mix of products, including branded museum items and exemplary works of craft and design by local and international artists and designers.

GALLERY – The new museum facility includes one primary gallery with movable walls for design flexibility in mounting multiple and individual exhibitions. As an international center for arts and culture, the Museum of Craft and Design will originate exhibitions, host traveling exhibitions, continue to present pop-ups, and collaborate with museums and artists from around the world to present outstanding works of craft and design, as well as explore the active roles craft and design play in everyday life.

The museum gallery, a 3,500 square foot exhibition space, has the feel of a large industrial space with 24-foot tall ceilings, finished concrete floors and towering concrete columns. The gallery’s expansive footprint will allow the public glimpses of exhibitions and artist installations through a wall size window facing the Third Street entrance.  Offering direct correlation between the Museum’s curatorial purpose and its role as a public institution, the Museum’s public entrance will serve as a vantage point to encourage the passerby to look into the Museum and engage with it as a larger part of the city’s life.

PROGRAM SPACE – The new facility will house the Museum’s first dedicated education workshop and programming space for visitors of all ages. The 450 square feet of multi-use space will provide a permanent location for the Museum’s popular MakeArt program for children, hands-on workshops for adults, special events and lectures, as well as private rentals.

PROGRAMS – In the new dedicated programming space the Museum of Craft and Design will offer visitors a variety of educational and intergenerational programs that mirror the Museum’s mission and enhance visitor experiences.

A centerpiece of the Museum’s programming is the popular MakeArt workshops, a hands-on educational opportunity for young people and their families, which now includes an After-School community workshop. The Museum’s new Family Program focuses on providing interactive craft and design activities for visitors of multiple ages and the Museum’s new Speaker Series for adults provides diverse perspectives on craft and design through workshops, demonstrations, and artist talks, and panel presentations. Working in collaboration with Etsy and SFEtsy, the Museum will host a monthly 21 & over Meet-and-Make Nights in celebration of the local makers and enthusiasts.

Project Leadership
JoAnn Edwards, Co-founder of the Museum of Craft and Design, has served as the Executive Director of the Museum since the founding in 2003. Opening to the public in San Francisco’s downtown Union Square neighborhood in October 2004, Edwards has guided the institution through numerous milestones, including the anticipated March 2013 Grand Opening of the Museum’s new permanent facility in San Francisco’s historic Dogpatch district. With more than 35 years of experience in visual arts and management, Edwards is responsible for the day-to-day operations of the Museum and for guiding the Museum’s artistic vision.  Under her leadership, the Museum has received acclaim for its exhibitions and programming, increased its national visibility and has become part of the Green Museums Accord, sponsored by the California Association of Museums to help encourage sustainable museum practices throughout the state and the nation.  Edwards was instrumental in overseeing the design of the Museum’s new facility, working in close collaboration with the Museum’s consultants, designers and architect.

The Museum of Craft and Designs Board of Directors consists of 11 Directors representing a wide range of professional backgrounds and experiences.  Steve Kaplan has served as the Board President since 2009. An accomplished leader and champion for the arts, Kaplan has long been dedicated to ensuring a place for the art of craft and design in the canons of art history.

The San Francisco design firm Gary Hutton Design collaborated closely with McCall Design group to execute the design of the Museum of Craft and Design.