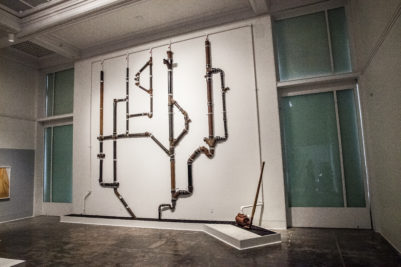 Anja Ulfeldt: Of Sound | Mind and Objects, An Interactive Exhibition

June 23, 2016, San Francisco, CA – The Museum of Craft and Design announces the opening of Oakland-based artist Anja Ulfeldt: Of Sound | Mind and Objects on Saturday, August 20, 2016. Featuring Domestic Infrastructure #2, a life-size working model of a drainage system brought to life by hidden acoustics and the act of listening, Of Sound | Mind and Objects makes visible a system often concealed behind walls and amplifies sounds typically obscured by everyday life.

Ulfeldt’s interactive, sound-based installation Domestic Infrastructure #2 is the second in a series of autobiographical sewer portraits compiled from configurations of drains found in the artist’s own residence and Bay Area neighborhood. Exemplifying an aesthetic of necessity, Ulfeldt’s artwork draws parallels between external infrastructures in the built environment and the circulatory and digestive systems of the human body.

Constructed from cast iron drainpipes, found objects, plumbing materials, an electric pump and an antique hand pump, as well as microphones and hydrophones placed inside the pipes, Domestic Infrastructure #2 amplifies gurgles, drips and flushing sounds of water moving in real time. Attempted ‘repairs’, in the form of shop rags tied around the joints, reveal a sense of anxiety and disrepair, as they are intentionally unable to stop water from leaking out of the pipes and dripping down the sculpture.

Museum visitors are encouraged to interact with the Domestic Infrastructure #2. To activate the installation the long wood handle of a pump is moved back and forth until the water level reaches the top of a wall. Microphones embedded in and on the pipes listen to changes in the soundscape as the water rises and eventually gushes and cascades through the drains. As the pumping continues, the pipes gradually begin to leak, building up a residue of rusty stains on the wall behind the work. As the exhibition progresses the installation will show signs of aging much like it’s domestic counterpart.

About the Artist:
Anja Ulfeldt is a durational installation artist working primarily in sculpture and time-based media. Time and presence are the consistent themes of her work, particularly the presence of the audience. She is captivated by the idea of “the moment” as a period of undefined duration, but also as an event of great importance. Imbued with a sense of mortality, that is both an examination and a celebration of contemporary life, Ulfeldt’s work addresses psychological relationships to human infrastructure through visual art, sound, and durational experience.

The daughter of a painter and an engineer, Anja grew up in Berkeley, CA, and earned her BFA from California College of the Arts in 2001 and her MFA from Stanford University in 2014. She is a founding member and co-director of two artist-run alternative spaces in northern California, one a brick and mortar contemporary gallery in Oakland and the other a floating venue for visual art, research, and performance built atop a converted potato barge operating in the Sacramento River Delta. She is a recipient of the Visions from the New California Award in 2010, the TSFF & SOMArts Murphy and Cadogan Contemporary Art Award in 2013, The AAF/Seebacher Prize for Fine Arts in 2014 and the Joan Mitchell Foundation Emerging Artist Finalist Award for 2015.