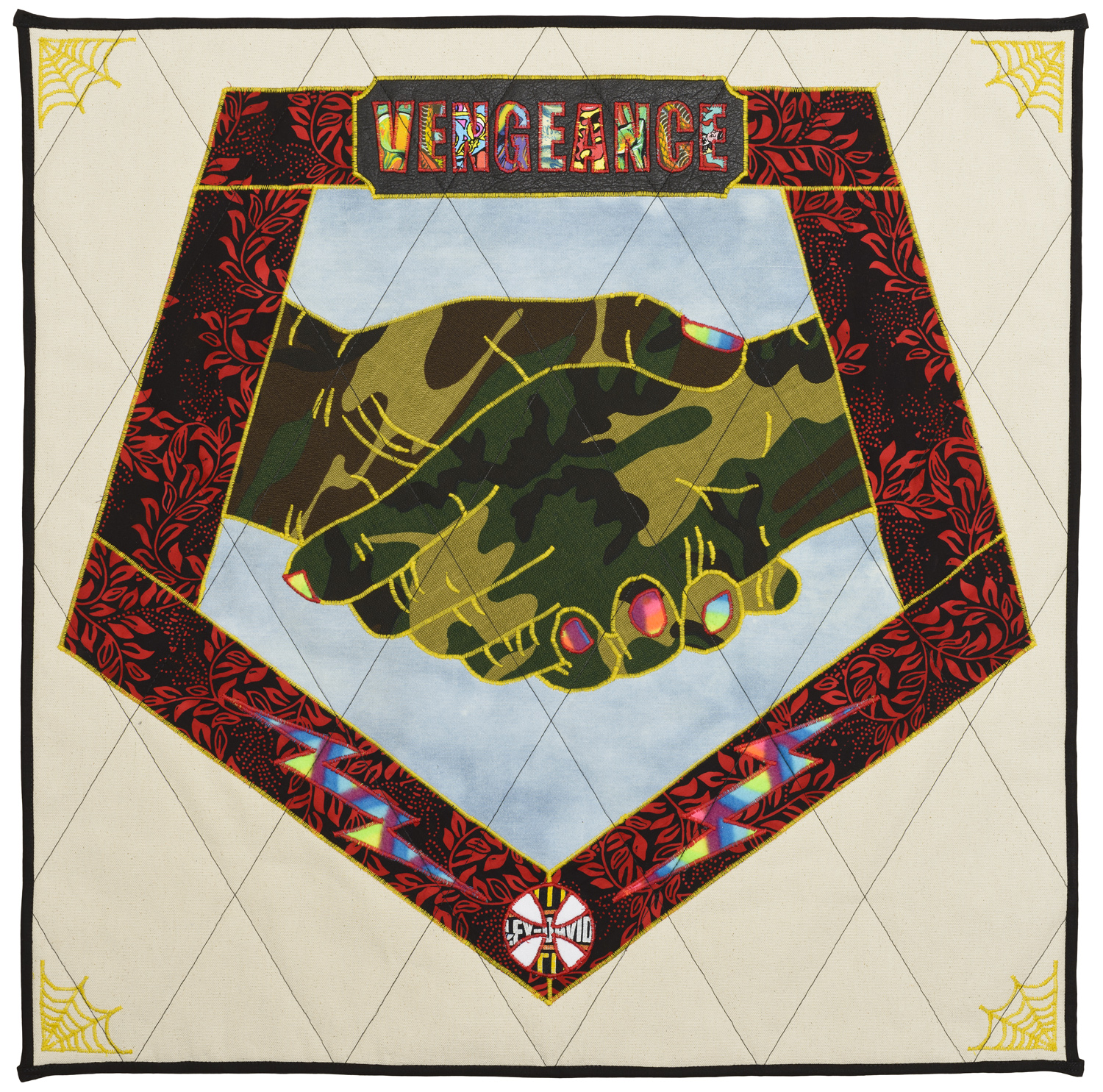 “Nakayama, Sinbondit, and Venom re-appropriate traditional craft methods […] and provide a counter note to the fast-fabrication alternatives that often clutter the modern world.”

February 23, 2016, San Francisco, CA – The Museum of Craft and Design is pleased to announce the opening of Constructed Communication: Nakayama, Sinbondit, Venom on Saturday, April 9, 2016. Featuring a focused selection of new and recent work by Kenji Nakayama, Amy Sinbondit and Ben Venom, the thematic exhibition looks at notions of the hand-made in our impersonal digital era and explores how three artists are utilizing traditional craft techniques to communicate in non-traditional ways: specifically through symbols, typography, and gestures.

The works of Nakayama, Sinbondit, Venom stem from very different traditions—ceramics, quilting, and sign-painting—each with a long history, a unique vocabulary, and self-contained community of practice. These communities are often perceived as closed, seemingly accessible only to those who speak a dialect specific to each medium.

These three young artists share a desire to open these communities of practice by creating objects that communicate not only a mastery of construction, but are also embedded with universal themes legible to a wider sphere of viewers. They seek to demystify the secrets of their respective crafts by speaking in a variety of ways with different forms.

“Though a combination of language and craftsmanship, Nakayama, Sinbondit, and Venom re-appropriate traditional craft methods with their chosen materials, novel approaches, and contemporary dialogues, and provide a counter note to the fast-fabrication alternatives that often clutter the modern world,” notes JoAnn Edwards, Executive Director, Museum of Craft and Design. “But rather than simply standing in opposition to the status quo in these practices, they provide fresh points of view that open new portals of understanding and use.”

Kenji Nakayama packs entire narratives into singular words and phrases by way of his indexical knowledge of and practice in typography. He communicates as much through the serifs and calligraphic flourishes of his letters as through the content they spell out.

Known for impeccable, clean lines and endless exploration of new letter forms, Nakayama paints layers of text and imagery onto everything from handsaws and gas tanks to gallery walls. Born in 1979 in Tomokomai on the island of Hokkaido, Japan, he studied mechanical engineering before deciding later in life to pursue the art of sign-painting at one of the last remaining outposts dedicated to tradition, the Butera School of Art, located in Boston, where the artist currently lives.

For his Museum of Craft and Design exhibition, Nakayama will create a new site-specific mural in enamel paint on 25 interchangeable panels. He will also present a series of sculptural ‘crates’ made from what he refers to as discarded ‘practice panels,’ which viewers will be able to interact with.

Amy Sinbondit creates intimate layers of extruded ceramic letterforms that are nearly, but not quite, legible. Her work mimics the motion of a scribble as if it were brought to three dimensions. Although rendered in hard material, her lines evoke calm and poetic nuances and are sometimes informed by the natural warp of gravity.

Sinbondit, who lives and works in Cleveland, Ohio, experiments in many mediums but most recently studied ceramics at the Rhode Island School of Design (MFA, 2002) and currently teaches at the Cleveland Institute of Art. Her work pushes the material possibilities of clay, often manipulating it physically and then removing evidence that it has been touched.

For Constructed Communication, she presents five recent sculptures—some in extruded porcelain (think an industrial version of a toy Play-Dough extruder) treated with an ancient Greek method called terra sigillata, which results in an extraordinarily smooth, self-reflective surface. These tube-like lengths of clay, shaped into ‘scribble forms’, speak to the notion of priming an idea, or the ‘doodling’ one does to bring and idea into translatable language. Other works in the show highlight recent experiments in plastics and 3D printing.

Ben Venom speaks in a symbolic language of tattoo, occult, biker, and heavy metal imagery. His elaborate, hand-sewn quilts include traces of the written word that act as signposts in the bold narratives he appliques onto fabric. The materials he uses may be soft, but his visual language is aggressive and strong.

Hailing from Cobb County, Georgia, where he grew up in the in the 90s admiring bands like Metallica, Slayer, Iron Maiden, and Fugazi, Venom moved to San Francisco to attend the San Francisco Art Institute (MFA, 2007) and currently teaches at the school as an adjunct faculty member. He first began quilting in a DIY-spirit of the punk scene mixed with a deep respect for the renowned quilting community of Gee’s Bend, which, like his own work, raises questions about the gendered nature of craft and notions of craft as a lesser category to fine art.

For this exhibition, Venom presents six hand-pieced quilts from 2015 that channel the heavy-metal vibe of previous work, but venture in new directions, sometimes featuring lettering formed from recycled rock t-shirts and other recycled fabrics either found or given to him by friends.

Museum of Craft and Design
Distinguished by a decade, the San Francisco-based Museum of Craft and Design (MCD) develops and presents unconventional and compelling exhibitions that showcase high-caliber contemporary work in craft and design. As a non-collecting institution, the museum originates exhibitions, hosts traveling shows, and collaborates with museums, universities, design venues and art centers to present a changing progression of distinctive craft and design-focused projects and related public programs for audiences of all ages.