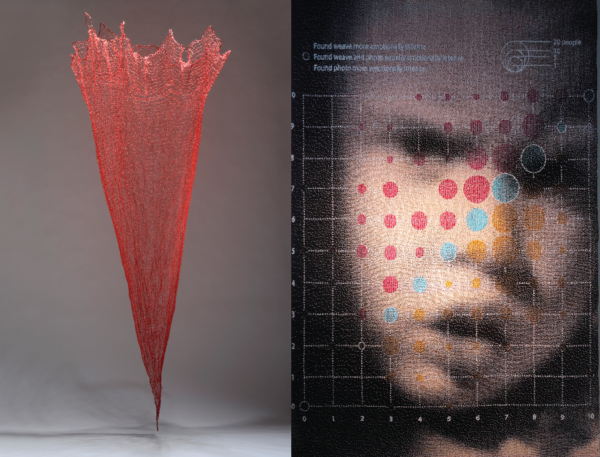 February 23, 2016, San Francisco, CA – The Museum of Craft and Design is pleased to present Lies that Tie: Carole Beadle and Lia Cook, opening on Saturday, April 9, 2016. Organized in collaboration with California College of the Arts (CCA) on the occasion of Carole Beadle’s and Lia Cook’s retirement from tenure as faculty members in the school’s renowned textiles program, this exhibition explores the far-reaching impact of these two artists’ illustrious studio and teaching practices, which have helped forge innovations in the field and shape contemporary ideas of the handmade.

Key contributors to the revolutionary fiber art movement of the 1970s, Beadle and Cook have helped CCA to build one of the premier fine arts-oriented textile programs in the country. For more than four decades, their aesthetic legacy has rippled outward to hundreds of undergraduate and graduate students at the college, many of whom, in turn, have launched prominent careers of their own.

“The lines that tie teacher and student in this exhibition reach forward and backward and link multiple generations in a network of interconnected making,” says Valoma of the show’s title. “Throughout their careers, Beadle and Cook have steadfastly promoted the role of the artist as a restless researcher and rebellious experimenter. They’ve also pioneered models for thinking and making in textiles that function across material, technical, and theoretical borderlines. The result is a ‘discipline-less’ discipline—an unruly, crisscrossing set of pathways bushwhacked into the transitional zones between fashion, sound, science, performance, intervention, and site-specific installation.”

About Carole Beadle
After completing CCA’s first-ever MFA in textiles under the tutelage of the famed Trude Guermonprez in 1968, Carole Beadle went on to found and teach fiber construction and fiber sculpture classes as part of CCA’s program. Although her first studied ceramics and later on weaving, she quickly moved towards off-loom construction—particularly three-dimensional felt work—which was emerging at that time as revolutionary. Indeed, she is often cited as “a felt-making pioneer.” Beadle’s work has been shown in numerous one-person and group exhibitions and she continues an active making practice to this day.

For this exhibition, Beadle presents three sculptural installations. Using crocheted wire and dyed silk, Beadle’s sculptures defy gravity and display her ability to work in many different mediums, examining the breadth of the fiber arts field and its relationship to the body.

About Lia Cook
A student of acclaimed fiber artist Ed Rossbach, Cook has long been a pioneer in the area of weaving, particularly in the creative use of cutting-edge technology, Jacquard systems, and complex weave structures. At the crossroads of craft, art, and science, her work often combines painting, photography, and digital media. She has been instrumental in developing the digital technology curriculum in CCA’s textile program and inspired an entire generation of artists working in Jacquard weaving.

Featured as part of Lines That Tie are selections from Cook’s current body of work about the brain. The weaving series came out of an artist residency at University of Pittsburgh in which she collaborated with neuroscientists to link her loom up with brain-scanning equipment to create visualizations of emotive responses in the mind. In this process, she conducted research on tactile translation of photographic portraits into woven structures and the brains responses to each, and later translated the renderings of her brain scan into an overlay pattern for the weavings.

About Guest Curator Deborah Valoma
Writer, teacher, and practicing artist Deborah Valoma is chair of CCA’s textiles program. From 2008 to 2011 she served as Director of Fine Arts at CCA and organized the international symposium Craft Forward, in which theorists and practitioners debated future trajectories of the field. Valoma’s specialized field of research is the cultural history of textiles as a global aesthetic practice. As a studio artist, she explores the material, conceptual, and poetic nuances of the medium through a hybrid practice incorporating both digital weaving technologies and hand processes. Her work been exhibited at galleries and museums nationwide, including the de Young Museum, San Francisco; the Los Angeles County Museum of Art; and the Textile Museum, Washington DC.

Museum of Craft and Design
Distinguished by a decade, the San Francisco-based Museum of Craft and Design (MCD) develops and presents unconventional and compelling exhibitions that showcase high-caliber contemporary work in craft and design. As a non-collecting institution, the museum originates exhibitions, hosts traveling shows, and collaborates with museums, universities, design venues and art centers to present a changing progression of distinctive craft and design-focused projects and related public programs for audiences of all ages.